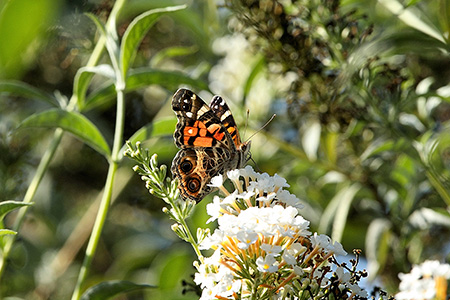 The Painted lady (V. cardui) is a large butterfly (wing span 5–9 cm (2.0–3.5 in)) identified by the black and white corners of its mainly deep orange, black-spotted wings. It has five white spots in the black forewing tips and while the orange areas may be pale here and there, there are no clean white dots in them. The hindwings carry four small submarginal eyespots on dorsal and ventral sides. Those on the dorsal side are black, but in the summer morph sometimes small blue pupils are present in some.

The American Painted Lady (V. virginiensis) is most easily distinguishable by its two large hindwing eyespots on the ventral side. virginiensis also features a white dot within the subapical field of the forewings set in pink on the ventral side, and often as a smaller clean white dot in the orange of the dorsal side too. A less reliable indicator is the row of eyespots on the dorsal submarginal hindwing; virginiensis often has two larger outer spots with blue pupils. The black forewing tips have four to five white spots; usually the largest is whitish orange.

The West Coast Lady (V. annabella) does not have obvious ventral eyespots. On the dorsal side, anabella lacks a white dot in the subapical orange found in virginiensis, and is a purer orange color. V. annabella has a fully orange subapical band and leading edge on the forewing. The submarginal row of hindwing spots in annabella features three or four blue pupils. The two larger pupils in annabella are the inner spots, rather than the outer spots as in corresponding virginiensis.

The Australian Painted Lady (V. kershawi) is quite similar to V. cardui. Its four ventral eyespots are less clearly defined, and it always sports at least three (often four) blue pupil spots on its dorsal hindwing. Caterpillars are found mainly on Ammobium alatum.